Order for
Your shopping cart is empty.
Order for

Exhibition
The Story of Science in the Philippines The Mind Museum's exhibition takes off from a narrative that presents science in over 250 interactive exhibits through five interconnected stories. The exhibition spans nature in scale, from the smallest thing in nature to the largest and everything in between: Atom, Earth, Life, Universe, and Technology. There are also two outdoor areas to continue discovery: Science-in-the-Park and the JY Campos Park. Almost all the exhibits in the museum are originally designed by Filipino artists who worked closely with scientists here and abroad to execute science principles clearly and beautifully.
About The Mind Museum
The Mind Museum is a project of the non-profit Bonifacio Art Foundation, Inc. It is dedicated to providing an extraordinary educational experience that inspires the public understanding of science. To strengthen its commitment to lifelong science learning, The Mind Museum is a member of the Association of Science -Technology Centers and the Asia Pacific Network of Science & Technology Centres. themindmuseum.org
Science-in-the-Park and the JY Campos Park
The Story of Science in the Philippines The galleries, corridors and parks of The Mind Museum 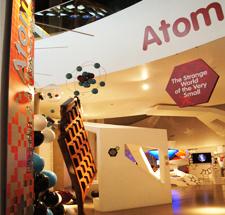 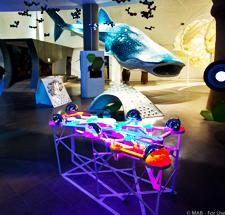 The Story of the Atom: The Strange World of the Very Small The Atom Gallery is the gallery with the most number of interactive exhibits. It contains the very elemental forces that are so familiar that we take them for granted like gravity and electromagnetism. It also presents the counterintuitive quantum world that resembles nothing from everyday experience, yet serves as the basis for much of the technology of today. The Story of the Earth: Nature Across the Breadth of Time The Earth Gallery features the first permanent T-Rex exhibit in the country along with other unique exhibits that focus on forces at work in shaping and reshaping the Earth. Knowing natural history is the way we can educate museum visitors on how long it took the planet to give us what we now inhabit. The Story of Life: The Exuberance of Life The Life Gallery features the exuberance of a living planet in all its forms. It features the various habitats that nurture an astonishing number and kinds of organisms. This gallery also features the inner spaces that inhabit this life in the form of molecules called DNA. The Story of the Universe: Its Beginning and Majesty The Universe Gallery showcases humankind’s wondrous fascination with outer space. It features exhibits that show how all of life, as we know it now, found its atomic beginnings in the stars in space. It enfolds visitors in the fundamental elements and forces at play in the universe. The Universe Gallery includes a mini, teaching planetarium that brings guests closer to the wonders of the universe. The Story of Technology: The Showcase of Human Ingenuity The Technology Gallery is the largest of all the galleries. It is the only exhibition space on the second level, overlooking the other four galleries. This gallery presents technology not as a mere tool, gadget or industrial advancement but as means to flesh out human values, to help us become better humans. The gallery is divided into five major themes with each theme occupying a Node. The themes of the Nodes are: How We Live, Who We Are, How We Know, How Things Work, and Here to There. Corridors Each of the galleries are connected by crucial links dubbed as Nature’s Webways. These feature immersive exhibits that help visitors make the transition in between the intricately woven stories of the galleries.
Lightbridge This innovative bridge connecting the Universe and Atom Galleries displays  the entire electromagnetic spectrum – a key concept in understanding the connection between space and time in the smallest (atom) and biggest  (universe) of things. Tunnelcraft Connecting the Universe Gallery and the Earth Gallery, this rotating tunnel features imagery from the Hubble telescope to simulate travel between outer space and Earth. Inner-Space Track A corridor featuring projections of unzipping DNA connects the Atom and Life Galleries to understand that animated life is made up of particles. Parks The outdoor areas of The Mind Museum

OTHER DISCOUNTS Not available on internet purchase. Visit TicketWorld outlet nearest you to present your ID.   • Senior Citizens: Less 20% (Net of VAT) • Student Discount: Not applicable on all shows. Call TicketWorld for details. • Persons with Disabilities: Less 20%. (Net of VAT) There are allocated seats for PWD, please visit a ticket outlet to purchase them. You can also inquire by calling TicketWorld for more details. • Diplomat Discount: Per REVENUE MEMORANDUM No.22-2004 of the BUREAU OF IMMIGRATION. Present VEC/VEIC card please. The above ticket discounts may not be used in conjunction with existing promos or packages.